NEW DELHI: A daughter-in-law has no right to continue to occupy the self-acquired property of her parents-in-law against their wishes, the Delhi high court has held in a significant order.

Justice A K Pathak in a recent verdict, made it clear that a self-acquired property doesn't fall under the definition of a "shared household" enunciated in the Domestic Violence Act and a daughter in law can't enforce her right in such a property.

In fact, HC went a step further, holding that even an adult son or daughter has no legal right to occupy the self-acquired property of the parents against their consent.

"Daughter-in-law cannot assert her rights, if any, in the property of her parents-in-law wherein her husband has no right, title or interest. She cannot continue to live in such a house of her parents-in-law against their consent and wishes. In my view, even an adult son or daughter has no legal right to occupy the self-acquired property of the parents; against their consent and wishes. A son or daughter if permitted to live in the house occupies the same as a gratuitous licensee and if such licence is revoked, he has to vacate the said property," the court noted in its order

HC was hearing an appeal by the daughter-in-law against a trial court's verdict directing her to hand over peaceful and vacant possession of the property to her estranged father-in-law. In her plea in HC the woman said she is a legally wedded wife and has a right to live in the property from where her father-in-law wants her evicted.

She claimed that the property was purchased out of joint family funds. Accusing the father-in-law and husband of harassing her for dowry, she informed HC that she is living separately from her husband due to matrimonial discord and divorce proceedings are on. Under DV Act, the property is a shared household where she has the right to reside, the wife maintained.

But the father in law through advocate Prabhjit Jauhar told HC that he is sole owner of the self-acquired property. Jauhar also convinced the court that the property was not purchased from joint family funds and his son had no share in it.

The father-in-law furnished before the court proof that he disowned his son in 2010 who has since then been living separately.

Justice Pathak concluded that the legal position "which can be culled out from the above reports is that the daughter-in-law has no right to continue to occupy the self -acquired property of her parents-in-law against their wishes more so when her husband has no independent right therein nor is living there, as it is not a "shared household" within the meaning of Section 17(1) of The Protection of Women from Domestic Violence Act, 2005."

HC also took into account lack of evidence to show that suit property was purchased from joint family funds.

Is ipc 498a really invalid and had been repealed ? SC examines

Is ipc 498a really invalid, redundant and had been repealed ?

Well. lets us do a small search and find out

The Amendment of Act 45 of 1860 is the amendment through which IPC 498a was inserted in Chapter XXA of the IPC.


So the only point that stands is that IPC 498a was INVALID in period between 31st  March 1988 and 3rd September 2001, else there is NO force in the arguement of Pandit Parmanand Katara on the current invalidity of IPC 498a (and other relevant sections of CRPC and IEA) due to the effect of Repealing act 1988 and is therefore is more likely to fall flat.


Below is Screenshot of THE REPEALING AND AMENDING ACT, 2001.ACT NO. 30 OF 2001, the portion marked in RED is the area of interest

It would be very interesting to watch the the solicitor general and legal eagles rebutt.

The full news is below 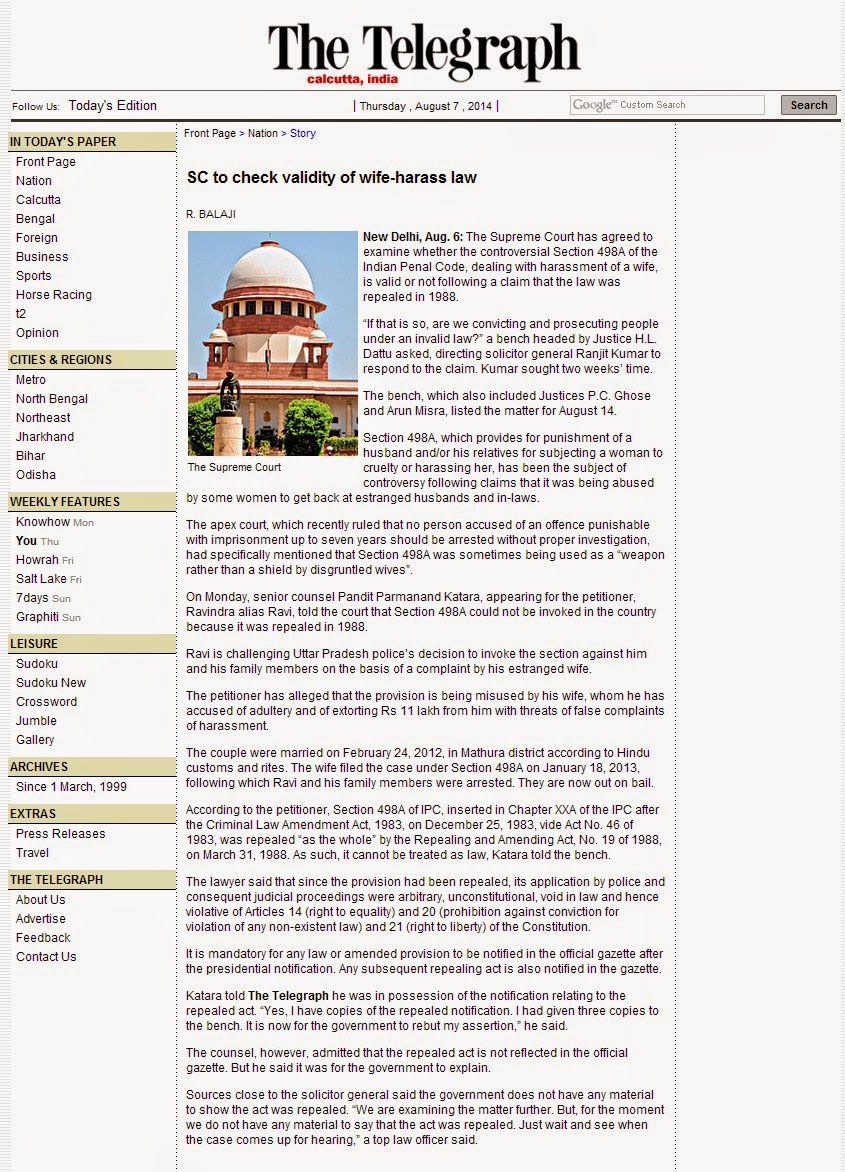 New Delhi, Aug. 6: The Supreme Court has agreed to examine whether the controversial Section 498A of the Indian Penal Code, dealing with harassment of a wife, is valid or not following a claim that the law was repealed in 1988.

“If that is so, are we convicting and prosecuting people under an invalid law?” a bench headed by Justice H.L. Dattu asked, directing solicitor general Ranjit Kumar to respond to the claim. Kumar sought two weeks’ time.

The bench, which also included Justices P.C. Ghose and Arun Misra, listed the matter for August 14.

Section 498A, which provides for punishment of a husband and/or his relatives for subjecting a woman to cruelty or harassing her, has been the subject of controversy following claims that it was being abused by some women to get back at estranged husbands and in-laws.

The apex court, which recently ruled that no person accused of an offence punishable with imprisonment up to seven years should be arrested without proper investigation, had specifically mentioned that Section 498A was sometimes being used as a “weapon rather than a shield by disgruntled wives”.

On Monday, senior counsel Pandit Parmanand Katara, appearing for the petitioner, Ravindra alias Ravi, told the court that Section 498A could not be invoked in the country because it was repealed in 1988.

Ravi is challenging Uttar Pradesh police’s decision to invoke the section against him and his family members on the basis of a complaint by his estranged wife.

The petitioner has alleged that the provision is being misused by his wife, whom he has accused of adultery and of extorting Rs 11 lakh from him with threats of false complaints of harassment.

The couple were married on February 24, 2012, in Mathura district according to Hindu customs and rites. The wife filed the case under Section 498A on January 18, 2013, following which Ravi and his family members were arrested. They are now out on bail.

The lawyer said that since the provision had been repealed, its application by police and consequent judicial proceedings were arbitrary, unconstitutional, void in law and hence violative of Articles 14 (right to equality) and 20 (prohibition against conviction for violation of any non-existent law) and 21 (right to liberty) of the Constitution.

It is mandatory for any law or amended provision to be notified in the official gazette after the presidential notification. Any subsequent repealing act is also notified in the gazette.

Katara told The Telegraph he was in possession of the notification relating to the repealed act. “Yes, I have copies of the repealed notification. I had given three copies to the bench. It is now for the government to rebut my assertion,” he said.

The counsel, however, admitted that the repealed act is not reflected in the official gazette. But he said it was for the government to explain.

Discussion on sexual harassment at work place on Haryana Express


Are laws against sexual assault being misused? It is because of suspect cases like these that genuine cases of sexual harassment and rape get discredited easily. This model who slapped a case of rape and harassment on Mumbai DIG Sunil Paraskar may not have had the correct motives, it has recently come to light. Listen to this clip to know more. 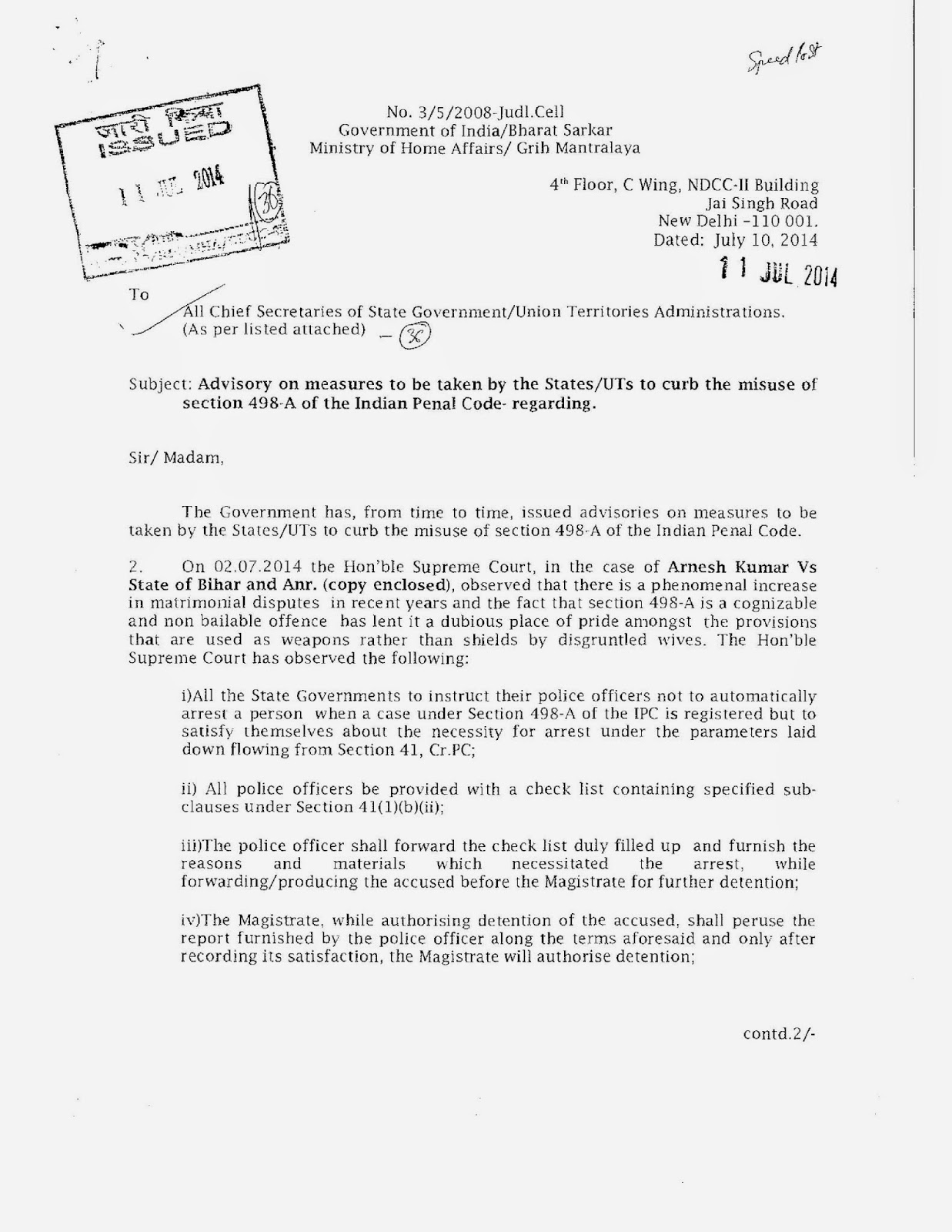 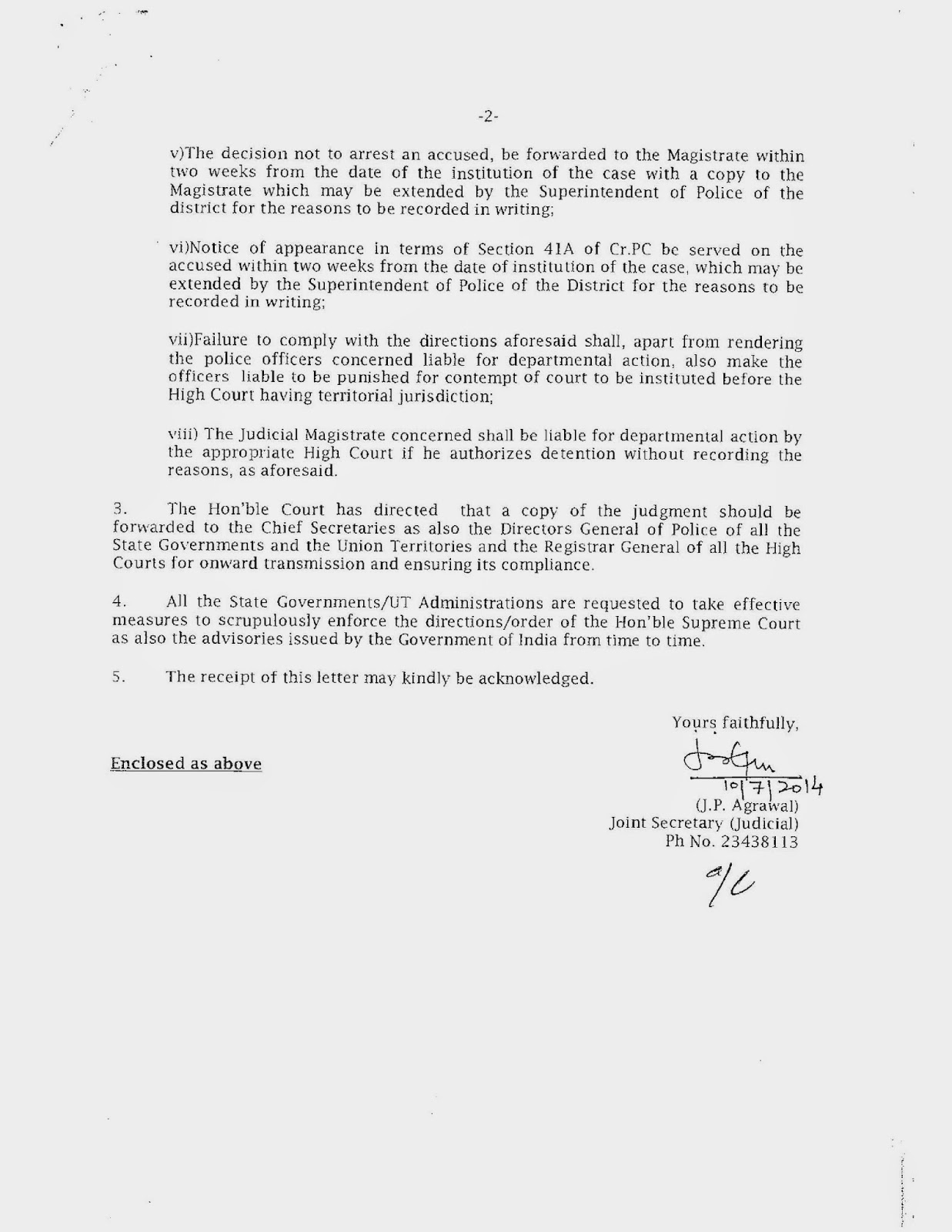 Are laws against sexual assault being misused?

Are laws against sexual assault being misused?


In a dramatic twist in the rape case against Mumbai DIG Sunil Paraskar, the CCTV footage of a meeting between the model and her former lawyer Rizwan Siddiqui accessed by CNN-IBN suggested that the model wanted to tarnish the DIG's image and gain publicity to enter a reality television show. The revelation also raised question whether the laws against sexual assault are being misused.

In cases of alleged elopement, The Hindu found, the complainant was almost always named as being 14 years old in the FIR.

Going by FIRs, most rape cases in Delhi in 2013 involved 14-year-old girls who were given intoxicant-laced cold drinks, abducted and assaulted. But The Hindu’s study of 600 court judgements shows this could not be further from the truth.

Police stations follow an informal script to record sexual assault cases, conversations with police officials and judges revealed. Madhu Mehra, feminist lawyer and executive director of Partners for Law in Development, says that their studies have shown the same.

In cases of alleged elopement, The Hindu found, the complainant was almost always named as being 14 years old in the FIR. This automatically makes her partner liable to be accused of abduction and rape and any marriage ruled invalid, police officials explained. Moreover, poorly educated parents were often unaware of the exact age of their daughters, one officer added.

To make the case sound as if the girl was abducted and did not go with the boy with her consent, an element of intoxication is added to the FIR, usually a “cold drink laced with a sedative”.

The problem is that none of this stands in court. In almost all of the 174 cases of elopement, the complainant was ruled to not be a minor by the court; only 10 cases resulted in statutory rape convictions. “So much time of the court is wasted in deciding this issue when the parents know from the start that she is a major,” one judge complained. Further on not one of 583 cases examined by The Hindu was the police able to produce any proof of intoxication.

For ‘promise of marriage’, another script is deployed: the accused is first described as having committed sexual assault on the complainant anywhere between two and 13 years before the FIR was filed; subsequently, the FIR says, she asks the accused to marry her, he continues having sexual relations with her for several years under this promise and ultimately calls it off with one last non-consensual encounter. “We tell the girl that you will have to say that at least the first time and most recent time was without your consent for it to go to court,” one police official said frankly.

None of this stands in court either; the only 12 promise of marriage cases that saw convictions were ones in which there was clear deceit, such as the accused being already married. At least two complainants interviewed by The Hindu corroborated this.

Even while activists often use the low conviction rate in rape cases (27% for India in 2013) to make the point that the police and judicial system are stacked against victims of rape, the judges The Hindu interviewed were equally insistent that the conviction rate be highlighted because it showed how poor the quality of evidence coming before them was. “The acquittal rate clearly shows that most of the cases coming before us are not rape cases as you might imagine them like the Nirbhaya case,” one judge said.

As a result of the sheer number of such cases, in off-the-record conversation with The Hindu at the least, both cops and judges said they tended to be sceptical of cases in which the complainant and the accused are romantically involved. When asked of cases in which a couple is romantically involved but the boy might sexually assault his partner, one judge shrugged it off; “If he beats her or attacks her there may be a case, but this never happens.” Intensely conscious of media scrutiny of their rulings, judges however were quick to add that their reading of ‘reality’ never biased them against outcomes.

The Hindu’s investigation of district court judgements on sexual assault indicate that a great distance is travelled between the FIR and the court judgement and at both ends of the process, risks are building. At the first instance, relying on FIRs for data on sexual assault or a framework for sexual assault in India may be unreliable. Moreover, media articles relating to a number of the cases looked at by The Hindu indicated that the media reports the FIR nearly verbatim without contacting the accused, and rarely follows up except in high-profile cases.

Source-http://www.thehindu.com/news/cities/Delhi/rape-cases-scripted-firs-fail-court-test/article6268958.ece?homepage=true
Posted by manthan at 11:55:00 PM No comments: Links to this post